With Tale of Tales retreating from the indie games scene, Steam offering refunds on games with under two hours of clocked playtime, and Desura's parent company going bankrupt, it's been an unnerving month for indie games creation.

Before I discuss where I'm at today, I'd like to talk about You Are Not a Banana and how Fluxscopic Ltd. came into being. Like Tale of Tales developers Auriea Harvey and Michaël Samyn I also have an interest in art, well at least the idea of creating meaningful socially challenging videogames. I also have a love for movies like Verhoveen's Robocop, Star Wars, and videogames such as the Last of Us and Journey. I've been playing videogames since I was about four and I have vivid memories of playing Yar's Revenge feeling that I was lost in some kind of alternative universe. I hung out in videogames arcades in the 80s and 90s and enjoyed the kinetic energy of games like Splatter House and Mortal Kombat, and the thrill of knowing that I was too young to be playing them. I also enjoyed silly/absurd games like ToeJam and Earl, and Bubble Bobble, and TV shows of the time such as Vic Reeves Big Night Out and Twin Peaks. These forms of entertainment quickly became part of how my friends and I connected.

When I made You Are Not a Banana I wanted to combine what excited me about my videogames past with a more modern take on life. The infinite graveyard puzzle and the randomly placed bag bomb in You Are Not a Banana can be seen as examples of this approach. Because it was my first game and more of an experiment than anything else, I never intended to publish it or submit the game for review. In fact, with You Are Not a Banana I was trying to be cheeky and to caricature the insatiable appetite of gamers/consumers today (including myself, I play COD too). For example, instead of saving a princess, you buy milk. Instead of high drama, the main character remains unmoved/unsatisfied by the increasingly sensational situations he finds himself in.

After I discovered short indie games like The Stanley Parable and Thirty Flights of Loving I decided to put my game on Desura. I later put the game on Steam Greenlight. Although the game received mixed reactions, the YouTube playthroughs, comments, and player feedback it received was beyond what I expected. Even some indie games journalists gave the game kind and constructive reviews. What stood out was how much the gaming community was willing to engage with the game. I had created experimental animation projects in the past but they never received the same attention by as varied a community. The ability to watch players' reactions on YouTube was an entirely new way to receive feedback. Seeing what worked and what didn't as somebody played was the equivalent of being able to step inside someone's head as they contemplate a painting. There is a 'playing games with my big bother back in the day vibe' to the let's play video scene.

You Are Not a Banana was on Steam Greenlight for about a year, not great in terms of momentum, but it eventually got enough votes (or Steam felt sorry for me). Again I was surprised by the support the game received by YouTubers such as Nilsey (The Yogcast) who promoted the game on their channels. During this time I was exploring work opportunities. I wasn't sure if it was possible to pursue making videogames any further but looked into funding possibilities regardless. I applied to Canada Media Fund's experimental stream as it seemed like a good fit. While the paperwork was involved the possibility of creating something more substantial was enticing. In order to receive the development fund it was necessary to incorporate as a business. Again the thought of making a game that could give as much joy to gamers today as I got growing up was all the motivation I needed.

My CMF application was successful. I partly developed my new game based on feedback from You Are Not a Banana. During development I asked myself if I were to create You Are Not a Banana with the benefit of hindsight, time, and a budget, what would I make? The answer was to build a highly dynamic game world with a strong narrative. While Mayhem in Single Valley retains the humorous philosophical elements of YNB it is a completely new game built from the ground up and has many new features and improvements. Nothing from You Are Not a Banana has been reused for Mayhem in Single Valley. The CMF fund allowed me to hire local programmers to create a more robust framework by building the game from the ground up. Their work has given the game a fully functional save option, an inventory system, options menus, and allowed for a more modular approach to adding levels, interactions, and cut scenes. To whet your appetite I have added an animation below... or above? Who knows with responsive media! 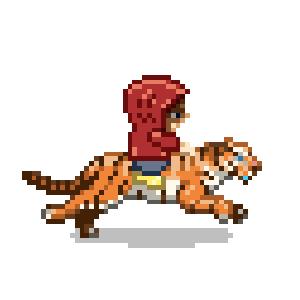